Yes, Euclid, there is a Pi Alley in Boston. I know it’s true because it’s a Foursquare location. It runs from Washington Street through to Court Square and is the location of several businesses and the Pi Alley Garage.  At left, a photo by Nicholas Nixon taken from Pi Alley, from the Photographic Resource Center’s auction a few years ago.

But what wag called it π alley? That’s less clear. Even if it was initially a mistake, the signage inside makes it clear that they mean the mathematical constant not some other pi. There are two main schools of thought, but in my view, neither one makes a lot of sense.

1. Pie. Some say that in the 19th century, lots of meat pies were sold in this place.  OK, I can believe that, but what caused the final “e” to fall off? A bubble in sign pricing? Syphilis?

2. Type.  Others say that the alley was adjacent to lots of printing businesses – so far so good – and frustrated typesetters would throw their pied type out the window into the alley.  Huh?  OK, “pied” type is a thing, it’s when you’ve managed to mix up little bits of type from different faces (like the execrable ransom note fonts) and have the unenviable task of sorting it out. Even in a busy printing office, I can’t see the stuff being thrown out a window when it could be sorted by some low-level employee or perhaps more likely, just melted down and recycled.  Even if you grant all that, it’s an odd move from “pied” (as in piebald, meaning multicolored or mottled) to “pi” 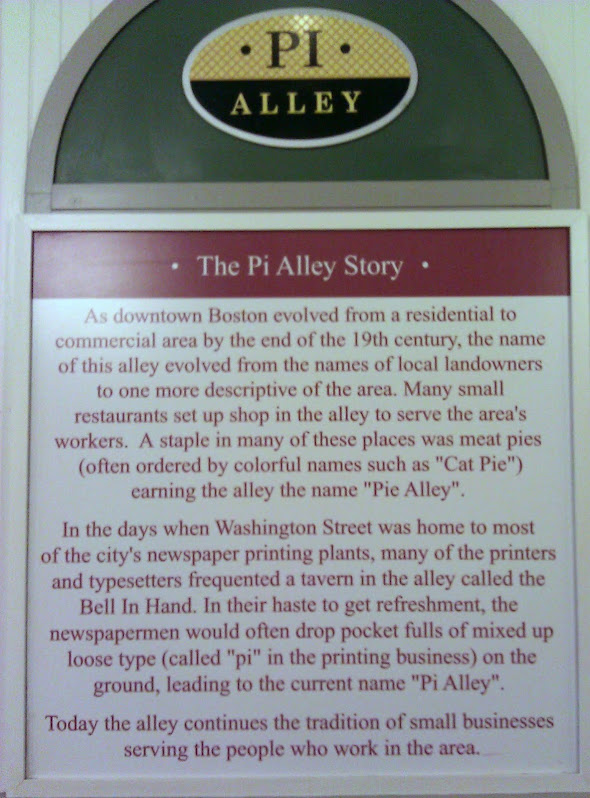 The sign at the Washington street entrance posits both theories.  I moved deeper into the alley and had a slice of pizza (pie) at Viga mid-alley. The Court square end of the alley looks like it hasn’t changed since the 70s. And I imagine the mystery of Pi Alley will continue at least another 40 years. Maybe I’ll see you there approximately on July 22.