Another kind of slow food comes to Boston City Hall

I had just about given up after a month of disappointment.  I didn’t think the M&M Ribs Truck was ever coming to Boston City Hall.  Four strikes and you’re usually out. But then, I chanced to spot a cryptic tweet:

Did those words mean what I think they meant? It turn out, yes, they did.  M&M Ribs finally graced Boston City Hall’s rainy windswept food truck plain with their presence.  B and P tagged along.  Actually, they could barely be restrained.

Early signs were good.  A medium-sized line to order but not too many waiting around for food.  A short menu board with two sandwiches, three meals, four sides and one dessert.  A nice canopy on a good-looking but not overly polished truck.

I ordered the brisket sandwich and a side of collard greens for a total of $9.  The Froyo and Savory trucks’ staffers stared jealously. 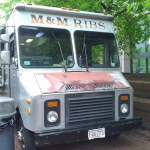 This is, in my partially informed option, a very well-run truck serving some very tasty food.  With a staff of just two, they moved the line along admirably, in stark contrast to the slow pace of similarly delicious Anthony’s Catering and the more numerously-staffed Paris Creperie.  I’d say the operational setup was on par with Staff Meal.

But the food is what it’s all about, and I am officially all about this food.  The collards were tender and not bitter at all.  On their own, I might have wished for more garlic or maybe even vinegar, but as a side, they were perfect.  Some  wished for a bit of bacon in there, and I sympathize, but for me, the greens are sufficient.  The sandwich was about the right size and not so overstuffed to be hard to eat.  The meat was falling-apart melty and the sauce was zippy and tangy. The bun knew its place and held its own. Fingers were licked.  The rest of the menu, notably the mac and cheese, must be sampled.

This would be the perfect place to end a food truck safari, but who would want to end such a journey?  Tomorrow, we’re giving Boston Speed Dogs one more chance to show up. Stay tuned.