Assembling the price of a happy city

How long does it take to go from one of Boston’s newest hip neighborhoods, the Innovation District, to one of Somerville’s even newer, actually not quite finished, ones, Assembly Row by public transit? During evening rush hour on a weekday, this trip of about 4.5 road miles took me almost an hour as I traversed the Silver, Red and Orange lines and the #90 bus. Somebody determined enough and in decent enough shape could have run this in about half an hour or walked it it not much more than an hour. Cutting Assembly Row a bit of slack, there will be an Orange line station there later this year. But why, you ask, would I undertake such an errand? Well, oddly enough, I was headed to a lecture on urbanism set up by the virtual and estimable Design Museum Boston. Christine McLaren, lead researcher of the book, Happy City, was giving a talk at Assembly Row’s outdoor amphitheater (!) overlooking the Mystic River. Well, that’s my second favorite local river and I do love a good amphitheater, so naturally I had to attend. Plus, I wanted to check out Assembly Row.

McLaren served up what I have to describe as the usual New Urbanist kool-aid – of which I heartily partook – but she brought a key insight I hadn’t been paying attention to. Cities, she says, are machines for happiness. The objective function of a city is not efficiency, environmental impact, or GDP, it’s happiness. The key determinant of happiness, according to McLaren’s research, is social connectedness, so urban designs that increase such connectedness are the ones that make people happier and the ones we should build. 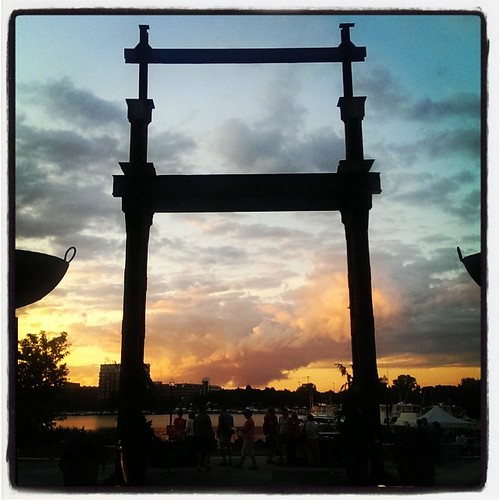 Here’s where I partially part company with the happy city people. They say the research shows that the far-flung suburbs are isolating and so are the densest apartment towers. The happy medium – attached townhouses, for example – is where you get peak happy. That may be so (I have my doubts but my sample size is small) but how can we get all the people who want to live in a city housed if we can’t go higher than townhouses? Like Matt Yglesias, I’m partial to density and don’t think it has to reduce happiness. A well-designed apartment building of any height is just a stack of floors, each one being a group of homes sharing some common space, not unlike a townhouse or courtyard.

Back to Assembly Row. It seems to meet many (though not all, watch those unprotected bike lanes!) the criteria of Happy City, at least it will once the Orange line station opens and the rest of the development is finished. So far as I can tell, there are 195 housing units from studio to 3 bedrooms in the 5-story Avalon development. I’m already thinking this isn’t enough.  As of Bastille Day, they’ve pre-leased 2/3 of the units, including all the 3BR. Mostly studios remain, starting 451 square feet or so for $1.,985/mo. Cheaper and no doubt more modern and well-appointed than downtown Boston but not so different from many existing mixed-use neighborhoods also a few T stops from downtown.

I don’t know how much taller the apartment building could have been by law, but I have to believe that the marginal cost of the 6th floor would be less than the average cost of the first five, and would have provided a 20% increase in housing units for less than 20% more cost. Repeat this logic as high as you care to go, and eventually the supply starts to reduce the price, and equilibrium tells you where to stop.

The median household income in the Boston metro area was a bit less than $72k in 2012. If you spent 1/3 of your gross income on housing, that would be about $2,000/mo, the price of the smallest studios at Assembly Row. If the average household is more than one person (looks like it’s about 2 and a quarter) the studio won’t work so well. One bedroom units start at $2,380, and 2BR at $2,835. It looks like the rent is too damn high and happy new urbanism at Assembly Row is out of reach to the average Boston family. To be fair, the developers have no particular obligation to serve the average family but I do think the new urbanists should strive to do so. It wouldn’t hurt if lawmakers lined up better incentives for developers to do so, too.

How did I get home from Assembly Row after 8pm? The Orange line would be of no use for going to Cambridge and the buses had largely gone to bed for the night. I took Uber, 3.5 miles in 16 minutes for $10.