Feast for the eyes

After a brief tour of St. Lucy’s feast, I was joined by Professor M at Nebo, a a nice little enoteca and restaurant at the cusp of the North End.  We enjoyed a crisp Gavi bianco, eggplant timballo and a pizza bianco con rucola.

Next to the bar was a painting that looked oddly familiar and we racked our brains but couldn’t quite place it except that it had something to do with the PRC.  We asked the waiter and he brought us the names of the artists of both sets of paintings in the restaurant.

On the far wall were three by Arlayne Peterson, landscapes with an inset of another version of the same landscape, but those weren’t the ones we were wondering about. 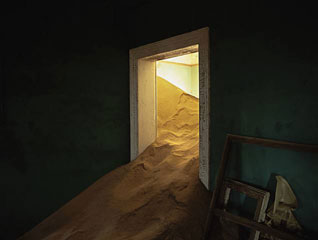 Next to the bar, the painting was by Richard Ehrlich, depicting the interior of a house filled several feet deep with sand.  Both artists are represented by the Miller Block gallery on Newbury street, but neither one quite rang the bell.

Hours later with a little googling and distance, I finally realized — I had seen photographs of the same sand house (in Namibia) by Cary Wolinsky at the PRC’s satellite at the MIT Center for Theoretical Physics.  Small art world indeed. I suppose the sand houses of Namibia might be like the Slot Canyons, one of those iconic spots that lots of photographers have shot over the years.  A quick Flickr search shows enough slot canyons and sand houses to fill a class on postmodernism.