At City Hall Plaza yesterday, there was a different kind of truck, more like a trailer really, offering Mexican sandwiches called tortas. It was Tenoch Movil, the roving branch of Tenoch Mexican restaurant of Medford and Boston.

This is my kind of food truck operation. Simple menu, simple pricing, do one thing – tortas, juicy Mexican sandwiches – and do it very well. Cash only, too, by the way. I chose the Campechana, which was swiftly assembled, wrapped, bagged, and handed over with a smile. The smooth operation produces a smooth sandwich. Spicy pork is front and center in the form of carnitas and chorizo, but the buttery telera bread, creamy avocado, and mild Oaxaca cheese cool it down just enough to get set on fire again by the chipotle mayo. 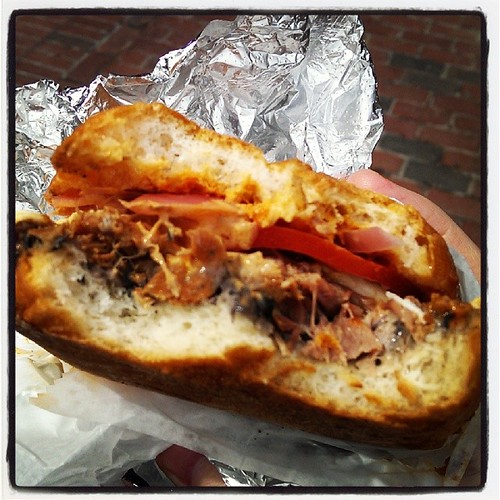 The sandwich looks small but don’t let it fool you, there’s no need for a side, though we did have a frozen yogurt craving afterwards perhaps to shake off some of the zesty spices. I’ve been enjoying tortas at Aguacate Verde in Somerville and will continue to do so, but Tenoch has won a major share of my heart, and perhaps narrowed my arteries, too.